After its introduction in 2010, the iPad quickly led the tablets market. Apple has always been good at designing streamlined devices with a slick UI that makes great user experience. Beside the design, it is no secrete that the ecosystem is of tremendous importance. By July 2015, there were more than 1 500 000 apps on Apple’s App Store. The integration with other Apple devices also contributes to making the iPad extremely attractive.

The flip side of the coin is that iPad is pricey, and so are its accessories. While, the extra cost was with good reason, it is not the case anymore. The competition is catching up. From the software point of view, Google’s Android became very mature with even more apps in the Google Play Store (1 600 000) than in the Apple’s App Store (1 500 000) by July 2015. Regarding the hardware, Apple’s competitors make very good devices. We found that some are simply great. This is the case of the Samsung Galaxy Tab S2 8″ which is the best alternative to the latest mini-table by Apple: the iPad mini 4. The comparison table below shows that the Galaxy Tab S2 is actually better than the iPad mini 4. 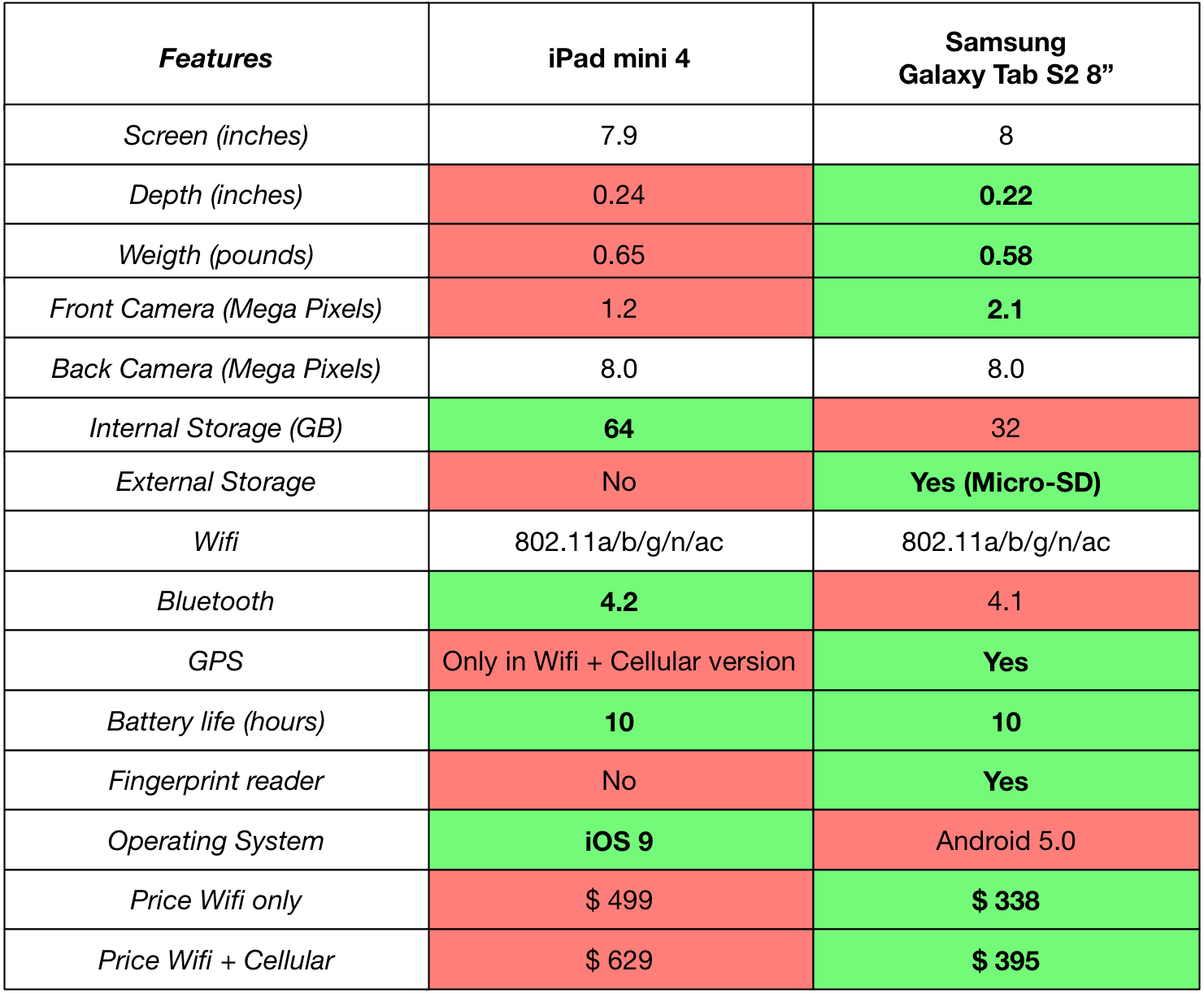 While they use different technologies the quality of the screens of both tablets are equivalent. The Apple’s Retina display is equally good as the Samsung’s OLED screen. The S2 has a screen that is little bit bigger (8.0 inches vs. 7.9), but it’s thiner and lighter. Both tablets have 8 mega-pixel back cameras. They allow for pictures and video with a rather good quality under good lighting conditions. The front cameras are of much lower resolution on both devices. The main usage is video conferencing using apps such Skype or Hangout. However, Samsung provide a better front camera, that can be used for casual selfies.

Storage are significantly different. There are three versions iPad mini, with internal flash memory than can be either 16GB, 64GB, or 128GB. We suggest to pick 64GB which is large enough to store many apps, pictures and videos for an average user, while being less expensive than 128GB. We recommend to avoid the 16GB version, unless you plan to use the iPad mainly for surfing the web.

Samsung chose to provide a single version of the Galaxy Tab S2 comes with 32GB of internal memory. This is already good enough for an average user. However, one can still expand storage since the S2 has a micro-SD connector. It also eases exchanging files between different devices. So, you can transfer pictures from your camera to your tablet, without requiring a computer.

Regarding networking, both tablets have similar capabilities. However, the iPad comes with the most recent version of Bluetooth, and hence it is ready for future applications of the Internet of Things. But, more importantly, the Wifi only version of the iPad mini lacks the GPS. Apple assumes that GPS requires cellular connection, which can make sense if you use the default app that downloads maps when needed. However, there are plenty of alternative apps that use maps already stored on the device and hence guide you while offline.

Battery life is the same for both tablets. It can last as long as 10 hours, but expect more 7 hours if you use intensively your device.

Regarding software, the S2 runs Andoid 5.0 (alias Lollipop), and the iPad mini runs iOS 9. While Android significantly improved, the user experience is still not as smooth as with iOS.

Last but not least, the price is an important criterion. You can get the Samsung mini-tablet Wifi only for less than $ 340. That is $150 cheaper than the Apple iPad. The difference is even bigger with Wifi + Cellular ones, since it can be me more than $200!

To sum up, the Sumsung Galaxy Tab S2 8″ is a really attractive tablet. It surpasses the iPad mini 4 by providing more features and still manages to be significantly cheaper. But, from the user experience point of view, the iPad remains superior. So, if you want a tablet for your mom or you are an Apple-addict, pick the iPad mini 4. Otherwise, just go for the Samsung.

Check out these related posts